Please visit our webpage at http://www.csurfolk.org/

We will not post any more Csurdongolo events of performances on this blog. All new events can be found on our website.

Táncház and Performance on October 8, 2011

Lakodalom van a mi utcánkban - performances in NJ and CT

The Csűrdöngölő Hungarian Folk Dance Ensemble and the Életfa Hungarian Folk Music Band plan to heat up the Crossroads Theatre in New Brunswick, NJ with passionate music and fierce dance on March 19, 2011 at 3 PM and 7:30 PM. The two groups together will evoke the dance and musical traditions of several regions in Hungary with breathtaking choreography, musical arrangements and an assortment of handmade costumes.

Everyone loves a wedding, and you are invited to one in this quaint Hungarian village. You will be traveling there on the ‘MÁV’, Hungarian State Railway. You will experience how versatile and diverse Hungarian folklore is, and how villages located just miles away from each other can be so unique. Please accept our gracious invitation on board the MÁV as we ‘time-travel’ to forgotten days of the past, when song, music and dance were the focal points of daily village life. Once you arrive at the wedding, you will be welcomed and we are sure you will enjoy the festivities. 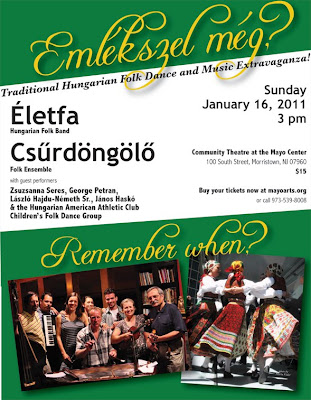 Hungarian Dancehouse
Location: 197 Somerset St., New Brunswick, NJ
Date and time: Oct. 9, 2010 starting at 6 pm
Dance teaching for adults and kids. Beginners welcome! Live Hungarian folk music provided by Eletfa. Dance performances presented by Csurdongolo. Hungarian food and refreshments available. Hungarian folk costume, handcraft, archive dance videos projected and photo exhibit.
The presentation is sponsored by the Middlesex County Cultural & Heritage Commission and has been made possible in part with funds from the New Jersey State Council on the Arts/Department of State, a Partner Agency of the National Endowment for the Arts.

More pictures from the Hungarian Festival!

All photographs by Lily Erdy
Set One: